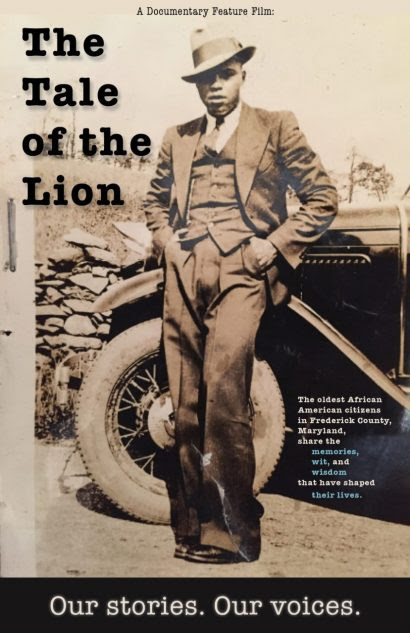 Tale of The Lion: Re-Airing at the MET

“Until the story of the hunt is told by the lion, the tale of the hunt will always glorify the hunter.” #AfricanProverb

In 2018, The Tale of the Lion: Our Stories, Our Voices originally aired at the Weinberg Center. on Saturday, November 12th, the Maryland Ensemble Theatre will be re-airing the film alongside AARCH Society at 7PM to build momentum for South & Saints, a MET production based on Frederick African-American history.

The oldest African-American citizens in Frederick County, MD share the memories, wit, and wisdom that have shaped their lives. This locally produced documentary celebrates the rich history held in the life stories of the oldest African-American citizens in Frederick County, Maryland. The poignant telling of their experiences from childhood, through segregation, to today is a window to the personal challenges they met because of racial prejudice, the community bonds forged in the face of adversity, and the strength and resilience that have shaped their lives, and our community. – AARCH

[READ: AARCH Hosts Public Art Workshop for New Downtown Landmark]
AARCH, The African-American Resources, Cultural, and Heritage Society has provided Black Frederick history to the public through walking tours, projects, education and preservation for over a decade. Learn more about AARCH here to get involved. Join a pre-show reception at 6 PM to learn about AARCH Society’s mission to preserve and celebrate Frederick’s African American history and their work to open the African American Heritage Center in 2023 in downtown Frederick. A Q&A moderated by interviewer Barbara Thompson with Tale of the Lion’s director Ingrid Palmquist will follow.
A community discussion related to the film will be led by Thompson from AARCH’s Living Treasures Program, and MET will provide a progress update and talk about how you can get involved with MET’s original devised show “South & Saints” in May.
Donations to AARCH Society are strongly encouraged. Tickets can be reserved here.
0LikesShare Post