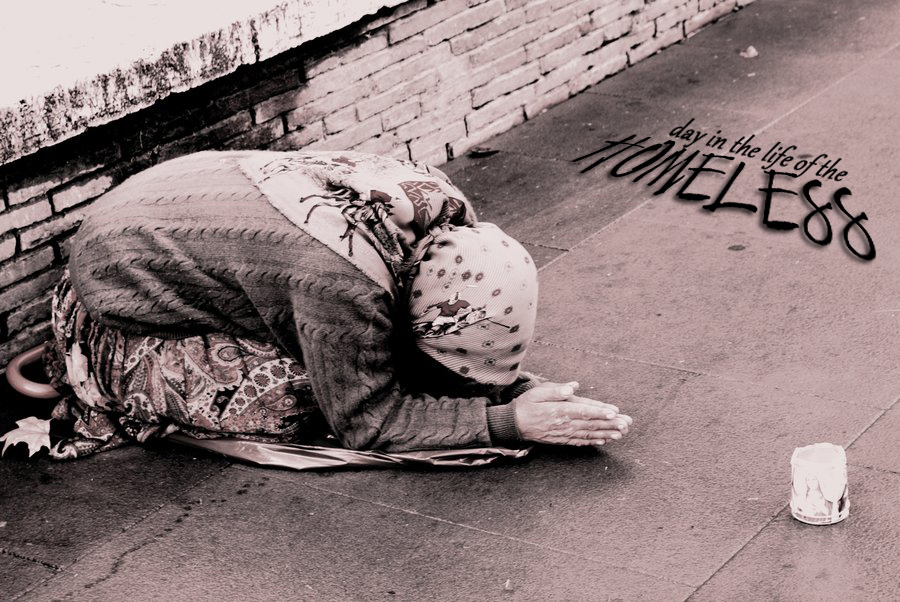 Into the Woods: The Homeless

Their day begins just as ours. They awake by sunrise, clean their home, run their errands; some head to work and others head to the traffic medians, only a few yards away, to hold up signs for income.

Nestled in the roundabout woods that divide downtown Frederick from Route 85, a matted trail of grass many times traveled is found that leads to a colony of blue tents.
We visited noonday. Beth*, an older white woman with no teeth and brown hair escorted us away from her home as to not awake her roommates. Beth lives with three other men, with each residing in his own tent. Before moving in the woods, she was sharing an apartment in downtown Frederick with a friend. Though she’s visited Frederick since childhood, this is has been her longest stay—with half of her time spent living in the woods. She didn’t disclose how she got here, and we didn’t push the issue. But she was adamant that she is content with her living conditions and thrives from her independence— her way, her rules, just the way she’s always liked it. She was willing to sacrifice the idealism of traditional American comfort; a house, car, job, and/or career as long as she lives on her terms. Most would label these circumstances as “hitting rock bottom,” but Beth says she makes it just fine in her rent-free abode. She has income; she appreciates living with nature and enjoys walking to wherever in downtown Frederick she needs to, whether it is a trip to the bank or the laundromat.
Further down the trail is Dana, an old black man originally from North Carolina who blew north to Frederick nine years ago. He left his family down south and they never visit. Though he found full-time work in the construction field, affordable housing is scarce. So when his good friend, Terry Neumann, suggested he move to the woods alongside him nine months ago, Dana agreed. What was his last resort is his pride and joy. He didn’t start off with much. Now, his space resembles an efficiency apartment. He has three big tents; one that is his acting closet, one in which he sleeps, and one that houses everything else. He has a stove, pots and pans, access to food, water, and heat. His friends in DTF offer him their homes to use running water for showers.

There are three communities within the woods, Beth being a part of one and Dana belonging to the other. She forewarned us not to explore the “other side” where the drunks were; they rarely communicate with each other and often bicker among themselves. “They’re a bunch of alcoholics,” she says. “They like to fight, like to call the cops, call the ambulance. Over there, they could care less. They could care less if they live or die over there. They’re just there because they keep getting kicked out of everywhere they go.”
But even with conflict, a familial atmosphere remains. No one will let the other go without. If a neighbor needs food, someone in the compound will provide. Beth values the importance of “scratching each other’s backs” in time of need. “We all work together here. That’s the way I feel like it should be. Somebody helps you, you help that person. I was raised old school. You treat people the way you want to be treated.”
Too proud to beg, there is a shared scorn for the local shelter. A manifestation of drugs and drama, these people would rather stay in their element.

“They want to give you something but then they ask for too much from you. It’s not worth it. They let you in at 7 o’clock in the evening and you gotta be out by 7 o’clock in the morning. What are you gonna do if it’s -17 degrees outside? What, are you going to stand outside with no roof over your head and no heat?”

The police do not bother them but are aware that they live there. Beth and others are the police department’s first resources in finding missing persons, as these people are on the front lines—they know what goes on in the streets.
During bad weather, local churches bring them resources such as propane and blankets to make it through the night. When the temperature drops, the residents use seven to eight bottles of propane a day. Beth explains preparation is key. However, even with assistance, the living isn’t easy. Living outdoors is an acquired sense of living that Beth and Dana has come to prefer only through experience. Though unique circumstances brought each of them there—some by choice, others by chance—these residents of the Frederick community make the best of it; it’s a place they like to call home in their ‘neck of the woods.’

*Names have been changed to protect identities. To be featured in DITL, email out40blog@gmail.com.

Originally Published: May 2016 by OUT40 Magazine, LLC